From the 17th century
Icelandic
manuscript AM 738 4to,
now in the care of
the Árni Magnússon Institute
in Iceland. 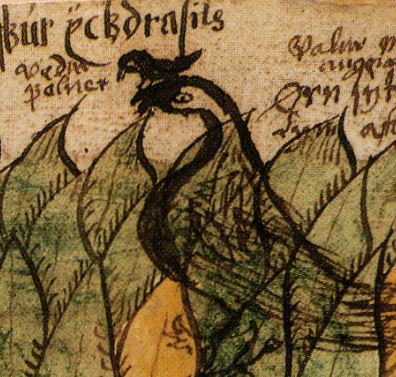 Detail van
17th century Icelandic
manuscript
AM 738 4to
Veðrfölnir is the hawk which lives in the World Tree Yggdrasill.
Yggdrasill, the gigant ash is the spill of the universe, which unites the worlds of the gods, the people, the giants and the dead. The ups and downs of the tree reflects the ups and downs of the universe; the tree shores the world, which it is protecting and it shares her distress.
Sources don't reveal the origin of the tree. It already existed before the world began, like it is destined to survive Ragnarök (Doomsday)
The roots are the connection between the different worlds Yggdrasill united: At its base are three wells: Several animals lives among the branches and around the tree: After Ragnarök (Doomsday), the world tree, though badly shaken, will be the source of new life.